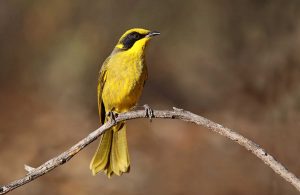 The Yellow-tufted Honeyeater is a visually striking bird. It has an olive-yellow head and broad black mask that extends from the base of its bill, over its eye to the sides of its neck. It looks more striking due to the elongated yellow feathers on the sides of its head forming conspicuous tufts, which provide the bird with its name. Living in the box-ironbark forests, Yellow-tufted Honeyeaters usually forage in the canopy, plucking insects and other invertebrates from among the foliage, or taking the sugary manna that oozes from the branches.

The Yellow-tufted Honeyeater feeds singly or in twos, or it may be found in groups of up to ten outside the breeding season, in the canopy of trees and shrubs. It feeds mainly on nectar from eucalypt flowers and insects from leaves and bark. When flowering is scarce, they often forage for manna, which is soft and white, appearing after insect attack on the foliage or trunks of particular eucalypts

The Yellow-tufted Honeyeater is gregarious, breeding in colonies or ‘neighbourhoods’ of adjacent territories. Pairs are monogamous, staying together on the same territory. Parents are occasionally assisted with feeding and nest cleaning by ‘helpers’. The tightly woven, cup-shaped nests are hung in understorey shrubs. The females do most of the incubation, but both parents, plus any helpers, feed the young. Two or three broods may be raised in a season.

Locally, the Yellow-tufted Honeyeater is found in open box-ironbark forests and woodlands, especially where a good middle layer of shrubs is present and often near water. They sometimes visit gardens. These birds are mostly easily seen in the Killawarra and Chiltern forest or surrounding wooded foothill forests, especially in gullies with a good shrub layer. Their gregarious nature means they can be very vocal at times making them relatively easy to locate. 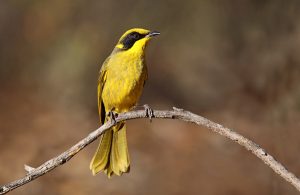 The striking Yellow-tufted Honeyeater by Chris Tzaros (Birds Bush and Beyond).