The night before Christmas

‘Twas the night before Christmas and all through the land
Wind turbines were turning supplying demand.
The stockings were hung by the chimney with care;
The chimney long rested to clean up the air.

The moon on the gum leaves and new-fallen dew
Gave the lustre of mid-day to the aspects in view,
When, what to my wondering eyes should appear,
But two visions of futures so stark and so clear

One picture so grim that I felt I would die
The other so lovely it near made me cry.
One vision of shortage and warring and dead
The other of plenty and joy widely spread.

The terrible scene ran on fossilised fuel
Releasing its carbon and climate so cruel.
Renewables powered the beautiful sight
Restoring the balance of nature’s might.

Sceptics were scheming conspiracy schemes
Twisting their tweets and morphing their memes,
But boffins were dreaming their dreams of great works
Solving the maths that will rid the world’s irks.

Delayers the data they were cherry picking
To stop the transition just as the clock’s ticking,
But then children are pointing to the science so clear
And taking great actions to banish the fear.

Deniers denying what’s plain as can be
While islands are dying in the wild rising sea,
But brave islanders work for their survival
Striving for justice and nature’s revival.

As dry leaves that before the wild bushfires fly,
When they meet with an obstacle, mount to the sky.
So up to the house-tops the embers they flew,
This awful vignette was sadly not new.

Now burning, now flooding, now drought and now smoke
Now fighting for food and for water and broke.
This future could be if we don’t understand
That it’s ours to be changed; it’s in our own hands

So with courage and sense I turned to the good
The misery faded and I laughed where I stood.
For I realised with glee that together we’ll give
To our children, a future of beauty, to live.

As I turned to my sleep, the stars they did fly
Writing a note of sweet hope in the sky:
“If you choose the new path it will all be alright
Happy Christmas to all and to all a good-night.” 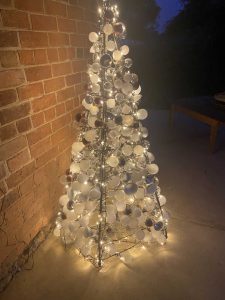