On the search for garden delights 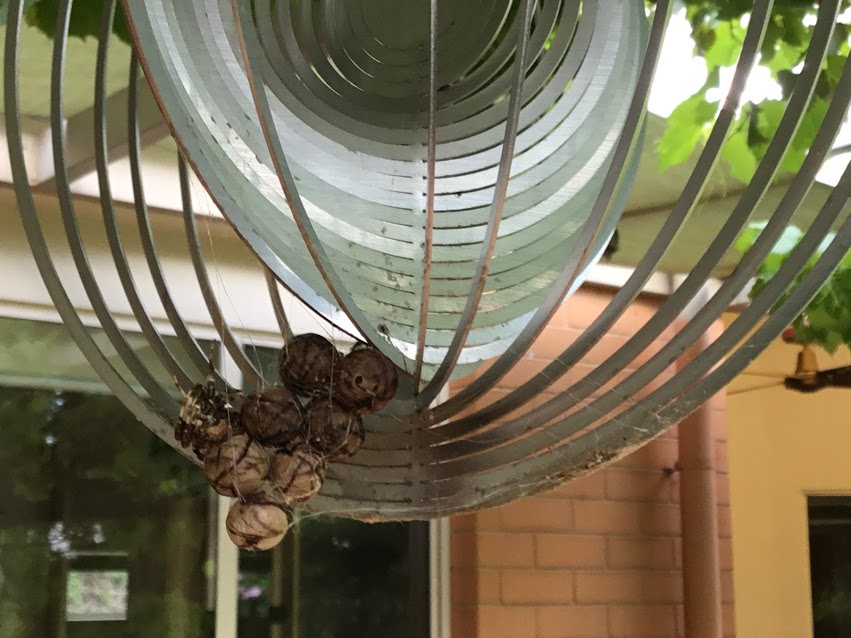 With summer full on now, drought and fire around us, there is still a way to delight in your garden and connect with other forms of life.

Recently I discovered a strange formation on a wind spinner under the grapevine. The culprit is a bird dropping spider whose egg sacks hang like bird droppings to put off attackers and to a degree, also the gardener.

Apparently, the spider which looks more like a crab, hangs from a web at night and produces pheromones that attract a hunting a male moth looking for a mate.  So, she eats male moths only and is therefore reducing the caterpillar and moth population in my garden. The spider is not dangerous to humans although it could deliver an annoying bite if handled.

Another beneficial spider found in the passionfruit vine is the Spiny Orb Weaver spider. It is so small it’s easily missed but it’s a weird little spider with spots and spikes and looks like a crab too. It is not dangerous but eats small pests that live in the garden and doesn’t come indoors. It’s good to know there are much easier ways of getting rid of garden pests than harmful sprays.

An insect I do delight in are the variety of bees in my garden both native and introduced. I have seen them hovering around the edge of the bird bath in the hot weather for a drink and recently had to save a drowning bee in the water fountain. I try now to float some bark in the water pots and also use sticks or branches for a ladder to the water source and back again.

A year ago, a swarm of bees visited the bottle brush. The swarm was as big as a small football and evidently forms when the queen decides to move home and takes hundreds of worker bees with her. I discovered if you leave the swarm alone, they just buzz about using the garden as a resort for a week or so and then one day they were gone again. No need to spray, scream or call the pest man. We sort of missed them when they moved on.

So much to learn and enjoy in a small back garden if you take the time to look.