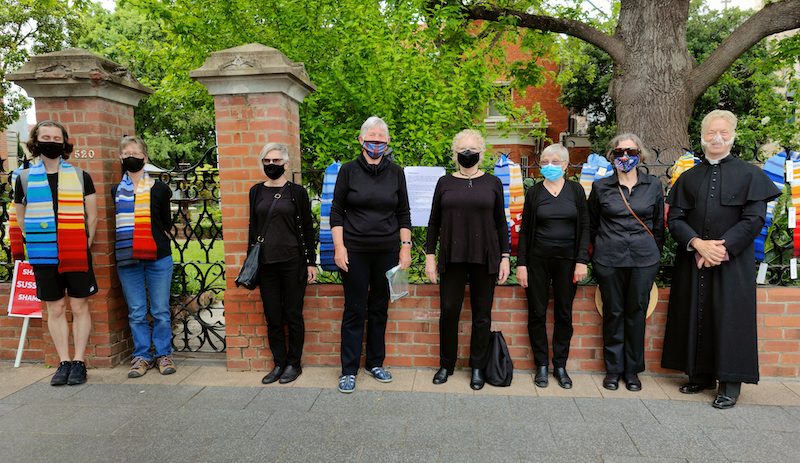 I’m retired, a grandmother, and I worry about our future on a warming planet.

I’m a sometimes member of the local branch of climate action group Extinction Rebellion (XR) and for the past four years I’ve been a member of Albury Wodonga Knitting Nannas for Renewables.

XR is a global environmental movement that aims to use nonviolent civil disobedience to make governments act to reduce climate warming.

Knitting Nannas is mainly an Australian movement. We meet each week, some-times outside Sussan Ley’s office, and sometimes in Wodonga outside Bridget McKenzie’s office. Meetings have been difficult to organise lately, due to Covid lockdowns. We bring folding chairs, signs and banners to show who we are, we knit a little, we chat, and we engage in conversations with passers-by.

They had ‘babies’ hanging out to dry on a washing line, the Red Rebel Brigade and people ‘playing dead’ on the footpath, Grim Reapers with black costumes and scythes, a ‘smoking’ pram using dry ice to create the effect, plus ‘ScoMo’ and ‘Sussan’ were there.

On Thursday, XR helped the Nannas to hang climate scarves on the fence outside St Matthew’s Church, opposite Sussan’s office. These scarves are based on an idea developed by the Women’s Institute, the British equivalent of our CWA.

They represent the average global increase in temperature across 100 years, from 1919 to 2019, progressing from cool blue colours to warmer red ones. They show the warming of our planet, “at a glance”, in a way that is easy to understand.

Peter McLeod-Miller, Archdeacon of St Matthew’s Church, very kindly gave us permission to hang our scarves on the church fence, along with a sign explaining their purpose. Our hope is that passers-by will stop to look, read the sign, and it will raise their awareness of the issue of climate change.

As Sussan’s office is directly across the street from the Church, she might look out of her window, see the scarves, and think about what she, as our Environment Minister, could be doing to help solve the problems of our warming planet.