The Nature Conservation Working Group (NCWG) is a group of like-minded landholders who all have a keen interest in their environment, especially the endangered Bush Stone-curlew. For the last thirteen years the group have been involved in the preservation and conservation of this iconic bird and its grassy box woodland habitat within the Murray Catchment of New South Wales.

The group has actively promoted and supported on-ground woodland habitat preservation and restoration work, implemented predator proof fencing trials and instigated community based group fox control programs. Several NCWG members are also involved in a publicity and educational program to help raise the general public’s awareness about the plight of the Bush Stone-curlew and are usually available to talk to interested groups about their program.

The young captive bred Bush Stone-curlews are released into a predator protected area early in the springtime and for the first three months they are monitored by the use of tail mounted radio transmitters and their locations are GPS mapped. To date the NCWG’s ongoing captive breeding and release program has successfully released a total of 87 Bush Stone-curlews into the wild and our monitoring results have shown that the majority of these released birds have survived and adapted well to their new life in the wild. 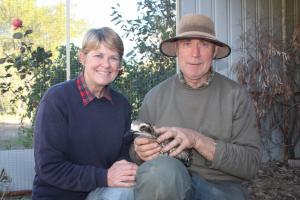