Corowa  District Landcare Inc. formed in 1996 and since then have undertaken projects on 51 sites covering 283 hectares and continue to work to a Strategic Plan. They have planted 69 hectares, direct seeded 88 hectares, erected 43 km of fencing and planted 23,000 plants. They have secured over one million dollars of government and in‐kind funding since 1996.

Corowa District Landcare Inc. has worked to protect existing remnants and repair degraded sites across Federation Council, in close association with the Murray CMA, the RTA, Crown Land agencies and Federation Council, particularly on roadsides, disused railway lines, old reserves and mining sites. Corowa District Landcare Inc have a unique relationship with their local Council who have provided their Landcare office free of charge since 1999, with in‐kind contributions to on ground works.

Corowa District Landcare Inc. engage in positive natural resource management wherever the opportunity arises including the development of a much needed Rest Area near the Riverina Highway intersection at Lowesdale, landscaped with native plants and interpretative signage, which has involved the local schoolchildren, and neighbours in the establishment and on‐going maintenance. The group has also developed a close relationship with urban and peri-urban land managers. To engage with as many people as possible the group produce Corowa District Landcare’s “Roundup” Newsletter which is packed with information and distributed widely, not just to their members. It is a vital communication tool for anyone Interested in natural resource management and agricultural innovation.

They were involved in the formation of a Women’s Ag & Chat group which connects farming women across the district to discuss farming issues, such as precision agriculture, weed control, office management and any topic in between.

This is a very dedicated band of Landcarers who have shown a great capacity to develop effective partnerships, and share their knowledge with the community. 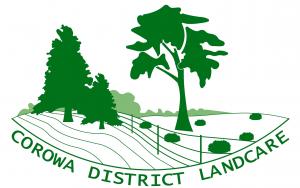