How old can trees grow?

What is the single oldest living thing on Earth? Until recently it was a Great Basin bristlecone pine in California called, appropriately, Methuselah. It’s age? 4,853 years old. Amazing as that sounds a tree recently discovered in Chile called Gran Abuelo (great-grandfather), is estimated to be 5,484 years old. This tree is an alerce, a slow growing conifer found in the Southern Andes.

Of course the only way to accurately age a tree is to count the tree rings after it has been felled. However, core samples combined with data from trees that have already been cut down can give very accurate dates.

Both these old trees are non- clonal. This means they do not share a common root system. This is in comparison to Sweden’s Old Tjikko, a Norway spruce, that is 9,550 years old. This tree is a clonal tree so that when the trunk dies the root system is still alive and sprouts new growth. Also known as vegetative cloning, this process can go on for millennia.

Clonal colonies can survive longer than individual trees. In Fishlake National Forest in Utah there is a colony of quaking aspen trees derived from an individual male called The Trembling Giant or Pando. This colony is considered to be the oldest single living organism on Earth (14,000 years) and has one massive root system.

On Mount Read in Tasmania there is a colony of Huon Pine trees. One tree has covered more than a hectare down a hill, reproducing genetically identical male copies. This tree has been dated at up to 2,000 years old but the organism itself is over 10,000 years old, determined by DNA samples taken from pollen collected from near bye Lake Johnson.

Old growth forests with their ancient trees are vitally important for absorbing and trapping carbon. Co2 can be trapped for up to a thousand years, even longer if the tree becomes buried.

Climate change is increasing the danger of wildfires. Droughts are placing trees under further stress. Land clearing is having a devastating effect.

Nearly 80% of the world’s original forests are gone. We are losing 30,000 hectares of tropical rainforest and another 30,000 hectares seriously degraded every day. Australia has lost 50% of its forests. Will those ancient trees become just a memory? 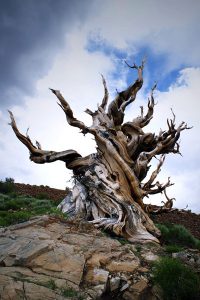